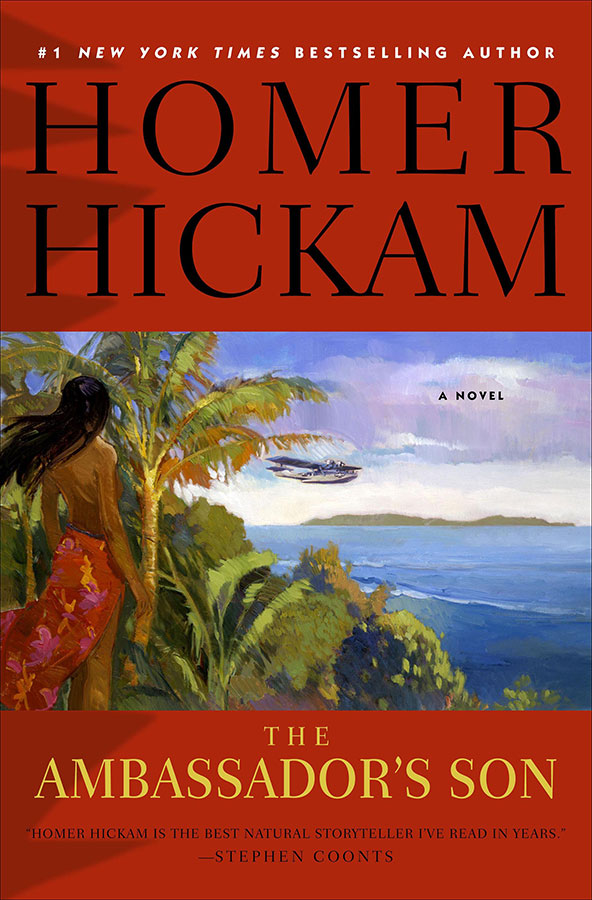 Fans of adventure, steamy romance, tropical islands, and, oddly enough, John F. Kennedy, are in for a treat when Homer Hickam brings out his latest novel, The Ambassador’s Son. The solid research evident in this fast-paced story is remarkable though never intrusive. The year is 1943, the setting the Solomon Islands of the South Pacific, and World War II is raging between the Americans and the Japanese with the local population of British colonialists and tribespeople caught between the opposing forces. Lieutenant David Armistead, a Marine Corps hero and cousin of the President of the United States, has gone missing. Some say he’s deserted in the face of the enemy and headed north into Japanese-held islands. All that’s known for certain is that he took with him the beautiful wife of the leader of a local militia.
Captain Josh Thurlow, the rough-edged Coast Guard officer first introduced in Hickam’s 2002 best-seller The Keeper’s Son, is given the assignment to find Armistead, though not necessarily to bring him back alive. Thurlow knows his quarry, even fought alongside him during the battle for Guadalcanal, and goes into his mission with mixed emotions but determined to see it through. Going with Thurlow are a laid-back crew of Coastguardsmen he’s brought with him from Killakeet, his island-home on the Outer Banks of North Carolina. One of them is his best friend, Ensign Eureka Phimble, the self-taught pilot of a Catalina float plane. Also recruited to assist in the search is an insecure, sickly PT-boat skipper nicknamed Shafty, recently returned to duty after losing his boat, and facing a court-martial for that loss. Shafty, it turns out, is more than he seems. He is a Harvard graduate, a best-selling author, and his father is the former ambassador to Great Britain. Thurlow is not impressed by his resume’ and Shafty, soon revealed to be John Kennedy, must earn his respect. Kennedy is dispatched to acquire another PT-boat to use in the search for Armistead, who also happens to be the son of an ambassador and Kennedy’s former classmate. When Thurlow finds himself lost in the jungles of New Georgia, his only hope for survival a mysterious, beautiful native woman named Penelope who has a tendency to chop off men’s heads, Kennedy and Thurlow’s crew have to learn to fend for themselves, beginning with a confrontation with a devious navy supply officer called Nick. Nick is also much more than he seems. He is the best poker player in the South Pacific, and the holder of the keys to Kennedy’s new boat. His full name: Richard Milhaus Nixon.
The adventure Hickam has crafted using a unique and believable blend of historical fact and fiction based on real people and events has twists and turns inside more twists and turns. Nothing goes right for the searchers. Eureka Phimble and his air crew are shot down on a remote island along with the Japanese pilot who did it, beginning an odd but touching friendship that provides insight not only to their humanity, but the struggle between their two nations. Kennedy is forced into a high-stakes poker game and must outwit Nixon to acquire the PT-boat. After converting it into a gunboat, he and his crew head north to catch up with Thurlow. Along the way, they encounter a lusty colonial woman named Felicity and her 11-year old son John-Bull, lost at sea while desperately trying to get back to their copra plantation on the legendary island of Noa-Noa. Felicity is enamored with young Kennedy and, after a harrowing battle with head-hunters, is pleased to have him as a guest at her decidedly shabby plantation home.
Thurlow is meanwhile seduced by exotic Penelope, who holds many secrets of her own along with a very sharp machete. Together, they must fight the Japanese and vicious renegades, including cannibals who seem intent on having them for lunch. No matter the obstacles, the quest for Lieutenant Armistead remains the goal. The young Marine officer is a shimmering, ghostly figure whose motivations for deserting are as mysterious as the hot, jungle-covered volcanic islands of the Solomons and the strange cults that flourish there, one of which Thurlow and the others soon encounter. It is a movement led by Joe Gimmee, a local holy man with some peculiar ideas on how to acquire treasure from the gods.
Hickam expertly weaves the adventures of these hot-blooded characters tighter and tighter until a fiery, climactic day when all gather to watch Joe Gimmee’s promised miracle. It is an astonishing one, and the insights into the human spirit it reveals will change the lives of everyone who watch it unfold.

From Rick Bragg, bestselling author of All Over But the Shoutin’
“THE AMBASSADOR’S SON is the reason I love to read. It takes you to a place where propellers and tides and bullets decide men’s fates and you feel like you’re sweating along with the heroes and villains. Homer Hickam is such a good writer that I’d probably read anything that he put out, but this adventure made me feel like a kid again.”

From James Bradley, bestselling author of Flags of Our Fathers and Flyboys
“With this tale of the South Pacific, Homer Hickam establishes himself as an heir to such greats as James Jones and Herman Wouk. THE AMBASSADOR’S SON is WWII storytelling at its best with plenty of action, exotic surprises and compelling romance.”

Nigel Hamilton, author of JFK: Reckless Youth
“I began Homer Hickam’s THE AMBASSADOR’S SON as a skeptic — and ended it cheering! The tale is pure fantasy — yet based on a real place, in a real war, involving real people: the Solomon Islands in 1943. Fear, courage, cynicism, lust and adrenalin propel this imaginary two-week episode in the young JFK’s life…the story is so gripping, you will have to know what happens.”

James D. Hornfischer, author of The Last Stand of the Tin Can Sailors
“A beguiling South Seas romance, an epic story of love and loyalty, a richly evoked roman-a-clef about a larger-than-life American legend – THE AMBASSADOR’S SON is all of this and more. Homer Hickam puts bright, livingcolor to our halftone memories of Jack Kennedy at war.”