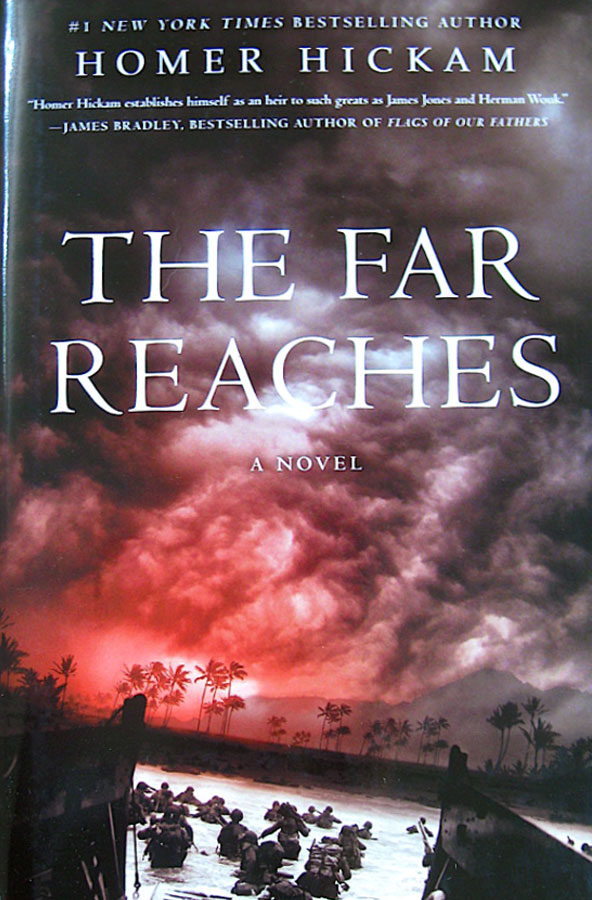 Homer Hickam is pulling out the stops for The Far Reaches, the third in the popular Josh Thurlow series. This time, like an old warhorse, Coast Guard Captain Thurlow joins the invasion of Tarawa where the marines are nearly defeated on the reefs before they ever reach the beaches. Josh flounders ashore through a floating graveyard of dead men and joins the survivors, determined to somehow wrest victory from disaster. After being wounded numerous times, and nearly driven insane by the heat, blood, and carnage of the desperate battle, Josh is spun off on one of his greatest adventures. Sister Mary Kathleen, a pretty Irish nun harboring a terrible secret and what she believes is her “greatest sin”, shanghais Josh, sidekick Bosun Ready O’Neal, and three American marines to a group of lovely tropical islands invaded by a brutal Japanese warlord, a man who seems to want, more than anything else, the surrender of the nun to his will. Josh and his little band must decide whether to help Sister fight her former captor, or return to Tarawa and the regular war, or settle down as “family men” in the romantic splendor of the South Seas. What follows is an explosive story, with Hickam expertly weaving the adventures of these hot-blooded characters tighter and tighter until a fiery, terrible day when Sister’s secrets and sins are finally revealed during a great battle in the lair of the warlord. The insights into human spirit the novel reveals are profound, Hickam’s sense of humor and irony are in full flower, and the narrative hot-blooded and real.

Publisher’s Weekly March 2007
This is Hickam’s third WWII action saga featuring Capt. Josh Thurlow, an officer exhibiting military insight and preternatural fighting abilities. The book opens in 1943 as an American fleet assembles off Tarawa, and the Marines prepare to land. Observing from the deck of a transport, Thurlow points out flaws in the attack plan and predicts the disaster that follows. Although only a spectator, Thurlow cannot resist the lure of battle; he leaps into a landing craft, struggles to shore and rallies the few surviving Marines until reinforcements arrive. Wounded during the melee, Thurlow loses consciousness only to awaken in a caravan of outriggers with a beautiful young nun, a dozen Polynesians and three nondescript Marines. The nun and her flock had endured the invasion as prisoners of the Japanese and are returning to the Far Reaches, their home islands, now occupied by Japanese troops. The nun has near-impossible plans in mind for Thurlow and a painful secret of her own; fans of the genre will know what to expect. Hickam (Rocket Boys; The Ambassador’s Son) keeps the stakes high and the tension taut in this fast-moving historical. (June)