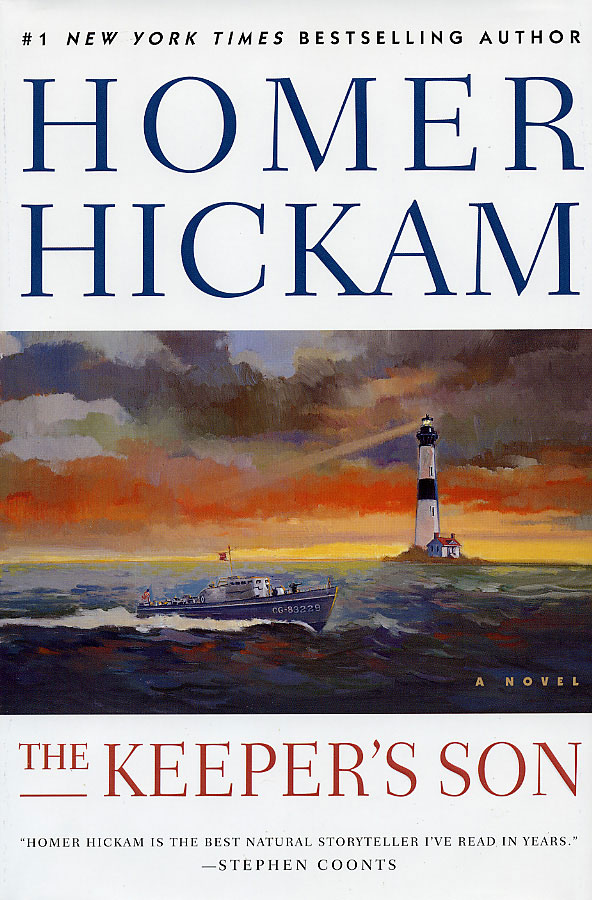 The Keeper’s Son is a lively tale of love and redemption set on Killakeet Island of the Outer Banks of North Carolina. Dominating the glorious beauty of the little island is the majestic Killakeet Lighthouse, kept for generations by the Thurlow family. Seventeen years after the loss of the keeper’s youngest son at sea, Coast Guard Captain Josh Thurlow still searches for his baby brother even after German U-boats arrive to soak the beaches with blood. Dosie Crossan, a lusty young woman in love with love, must decide between Josh and her own self-respect while fighting her own war against the invaders. The strands of the story – inexplicable loss, the sometimes strange pathways of love, a plan of hideous murder, the unyielding nature of Providence – are wound ever tighter until the stunning and astonishing final chapter.

Homer Hickam has made a career of writing about small towns, especially the small town of Coalwood, West Virginia. His memoirs Rocket Boys (aka October Sky), The Coalwood Way, and Sky of Stone were heart-tugging, and dramatic stories of growing up in a small 1950’s coal camp deep in the heart of Appalachia. Now, with his latest novel, Homer is once more writing about a small town but one set on the lonely island of Killakeet “south of Hatteras, north of Lookout,” a place of “fishermen, clam-stompers, oyster-rakers, Coastguardsmen, and lighthouse keepers” along the legendary Outer Banks of North Carolina. The Keeper’s Son, Homer’s first of a planned trilogy of novels about a Coast Guard captain named Josh Thurlow and his family during the years of World War II, is a book with lovable and believable characters, a great page-turning plot, and a romantic, sweeping setting like none other. For what could be more romantic and dramatic than the vast and glorious sweep of sandy isles studded with lighthouses known as the Outer Banks? This is the area also known by mariners as the Graveyard of the Atlantic and for good reason. For centuries, the deadly shoals and awful winds and storms of this place have sent thousands of ships to brutal deaths beneath its turbulent seas. Still, as dangerous as it is, the Outer Banks is a place of great beauty. As Homer describes it in The Keeper’s Son, it is a place “where the water was blue and deep, and the tropical wind whistled free and clear, and the big fish danced their eternal dance of life and death.”

And it is that eternal dance that Homer captures so well in his new novel. Josh Thurlow is the son of the lighthouse keeper of Killakeet Island, but he isn’t the only keeper’s son. The novel begins with the heart-wrenching loss at sea of Jacob, Josh’s baby brother, a loss that was Josh’s fault but cannot be completely explained and threatens to wrench apart the Thurlow family. Years later, after a self-imposed exile, Josh returns to Killakeet as the captain of a small Coast Guard patrol boat assigned to patrol the waters off the island. Though he has been forgiven by Keeper Jack, his father, he has not forgiven himself and Josh still searches against impossible odds for his missing brother. Then Dosie Crossan, a spirited young woman in search of herself, arrives on Killakeet to complicate Josh’s life. When all the ladies of Killakeet start working to get Dosie and Josh married, it’s almost a relief for Josh when the war begins and he must contend with German U-boats that arrive just offshore and start sinking the tankers and freighters he is charged to protect.

The Keeper’s Son has another perspective and that is from the point of view of the German submariners, especially Captain Otto Krebs, an orphan who has grown up to become Germany most famous U-boat ace. Krebs and his crew have come to Killakeet with a mission to sink ships but soon discover that they are caught up in a odious plan to commit mass murder. Josh and Krebs, bitter enemies, must learn to trust one another to head off disaster. Gradually, Josh also comes to realize that that perhaps Krebs may have unwittingly brought with him the key to the mystery of the loss of little Jacob.

“I write all my books for the primary purpose of entertaining my readers,” Homer says, “but I also want them to learn something, too. With The Keeper’s Son, besides working very hard to write a page-turner, I wanted to bring back to life a time when our country was under attack by outside and nearly incomprehensible forces, very much as we are today. Not too many people know it but there was a huge and terribly bloody battle along the eastern shore of the United States in 1942. Over 400 of our ships were sunk by U-boats and there were also landings made up and down the coast. When I researched my first book, Torpedo Junction, a history of that battle, I kept hearing from folks who lived on one or the other islands of the Outer Banks during that era. They told me stories of Germans landing on the islands with mayhem in mind. According to these stories, the island people fought back and drove them off. Although I could never document it, there was a ring of truth to the stories. The people of the Outer Banks, owing to their natural isolation, have a history of taking their affairs into their own hands, including the defense of their islands.”

But why does a popular author known mostly for writing memoirs turn to the writing of fiction? Homer answers that question this way: “I savor the flexibility in fiction to create colorful, sometimes larger-than-life characters who will still ring true and fascinate my readers. It’s always been my belief that it isn’t plot or setting that makes for the good story, but people, and I think my readers are going to enjoy reading about the people of Killakeet Island, not to mention the marauding U-boaters. I also think that they’re going to love the romantic setting of this book and it’s got a heckuva plot, too!”

From Publishers Weekly
A gutsy Coast Guard officer battles German submarines and 17 years of unfettered guilt on the North Carolina coast in 1941 and 1942 in this high adventure yarn. Hickam, the author of the memoir Rocket Boys (which was turned into the film October Sky), knows a great deal about submarine warfare in WWII, as evidenced by his 1989 nonfiction naval history, Torpedo Junction. This is the first novel of a planned series about rough and tumble Coast Guard Lt. Josh Thurlow and his unusual patrol boat crew during WWII. Josh, 31, is a career officer assigned to Killakeet Island, along North Carolina’s treacherous Outer Banks. Both he and his father-the keeper of the Killakeet Lighthouse-are haunted by the loss at sea and presumed death of Josh’s two-year-old baby brother 17 years earlier. Shaken from his brooding by the appearance of German U-boats, Josh must try to protect the merchant ships torpedoed every night offshore. His patrol boat is small and ill-equipped, and his crew is a wacky group of casual islanders who aren’t sure they really want to fight anybody. A talented U-boat commander named Krebs becomes Josh’s honored enemy, but another U-boat skipper is a far more ruthless and dangerous adversary. Josh must fight both, as well as his suspicions that his little brother may not be dead after all; the reappearance of a childhood sweetheart leavens the mix. Hickam provides a vivid and convincing portrayal of life under the sea in a U-boat, as well as on the surface in a fragile patrol boat. Well-crafted characters, gripping naval warfare and colorful island life come together in this dynamic and exciting tale.
Copyright 2003 Reed Business Information, Inc.

From Booklist
This excellent story of World War II on the Outer Banks will surprise no one who remembers Hickam’s Torpedo Junction (1989), his nonfiction account of the U-boat war off the American coast in 1942. Drawing on his research for that book, Hickam deftly crafts a romantic, even melodramatic story, occasionally venturing beyond the limitations of historical factuality but always presenting consistent viewpoints for both American and German characters. The former include the title character, Coast Guard Lieutenant Josh Thurlow in his 83-foot patrol boat, the Maudie Jane; her motley crew; and the inhabitants of Killakeet Island. The Germans are hard-driving but ethical Captain Krebs, commander of U-560, and his crew, one of whom, Harro Stollenberg, may be Josh’s brother, Jacob, who was lost at sea 17 years earlier. The pacing, the building of character with carefully chosen detail, and the masterful construction of a setting are as much strengths of this novel as they are of Hickam’s other books. He evokes with great skill a time and a place that is passing out of living memory, and if he completes his projected series about Josh Thurlow and those who went down to the sea in Coast Guard cutters, he will have made a very notable addition to American maritime literature, indeed.
Roland Green Copyright © American Library Association. All rights reserved