Rocket Boys has been translated into eight languages and has received many awards. It was selected by the New York Times as one of its Great Books of 1998 and was an alternate Book-of-the-Month selection for both the Literary Guild and Doubleday book clubs. It was also nominated by the National Book Critics Circle as best Biography of 1998. 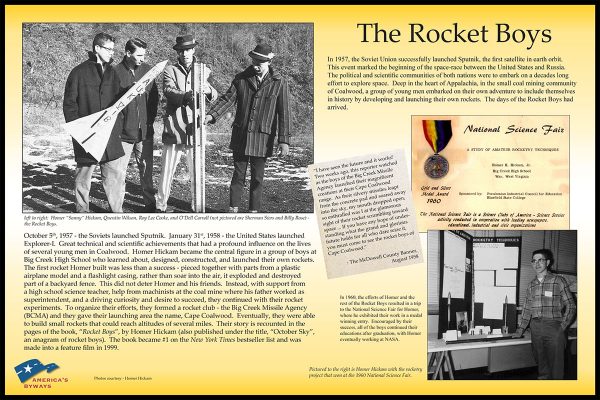 From Publishers Weekly
Great memoirs must balance the universal and the particular. Too much of the former makes it overly familiar; too much of the latter makes readers ask what the story has to do with them. In his debut, Hickam, a retired NASA engineer, walks that line beautifully. On one level, it’s the story of a teenage boy who learns about dedication, responsibility, thermodynamics and girls. On the other hand, it’s about a dying way of life in a coal town where the days are determined by the rhythms of the mine and the company that controls everything and everybody. Hickam’s father is Coalwood, WV’s mine superintendent, whose devotion to the mine is matched only by his wife’s loathing for it. When Sputnik inspires “Sonny” with an interest in rockets, she sees it not as a hobby but as a way to escape the mines. After an initial, destructive try involving 12 cherry bombs, Sonny and his cronies set up the Big Creek Missile Agency (BCMA). From Auk I (top altitude, six feet), through Auk XXXI (top altitude, 31,000 feet), the boys experiment with nozzles, fins and, most of all, fuel, graduating from a basic black powder to “rocket candy” (melted potassium chlorate and sugar) to “Zincoshine” (zinc, sulfur, moonshine). But Coalwood is the real star, here. Teachers, clergy, machinists, town gossips, union, management, everyone become co-conspirators in the BCMA’s explosive three-year project. Hickam admits to taking poetic license in combining characters and with the sequence of events, and if there is any flaw, it’s that the people and the narrative seem a little too perfect. But no matter how jaded readers have become by the onslaught of memoirs, none will want to miss the fantastic voyage of BCMA, Auk and Coalwood. First serial to Life. 10-city author tour. (Sept.) FYI: Rocket Boys is currently in production at Universal, which plans to release it later this year titled October Sky.
Copyright 1998 Reed Business Information, Inc.

From Amazon.Com
Inspired by Werner von Braun and his Cape Canaveral team, 14-year-old Homer Hickam decided in 1957 to build his own rockets. They were his ticket out of Coalwood, West Virginia, a mining town that everyone knew was dying–everyone except Sonny’s father, the mine superintendent and a company man so dedicated that his family rarely saw him. Hickam’s smart, iconoclastic mother wanted her son to become something more than a miner and, along with a female science teacher, encouraged the efforts of his grandiosely named Big Creek Missile Agency. He grew up to be a NASA engineer and his memoir of the bumpy ride toward a gold medal at the National Science Fair in 1960–an unprecedented honor for a miner’s kid–is rich in humor as well as warm sentiment. Hickam vividly evokes a world of close communal ties in which a storekeeper who sold him saltpeter warned, “Listen, rocket boy. This stuff can blow you to kingdom come.” Hickam is candid about the deep disagreements and tensions in his parents’ marriage, even as he movingly depicts their quiet loyalty to each other. The portrait of his ultimately successful campaign to win his aloof father’s respect is equally affecting.
–Wendy Smith.

The Making of October Sky

On Set: Mr. Bolden (Randy Stripling) signs a script for Homer and Elsie.

Wonder where he learned that? On set: Chad Lindberg as "O'Dell" and Jake Gyllenhaal as Homer